Demystifying the Crypter Used in Emotet, Qbot, and Dridex

Demystifying the Crypter Used in Emotet, Qbot, and Dridex

A crypter is software that can encrypt, obfuscate, and manipulate malware to make it harder to detect by security programs. The Zscaler ThreatLabZ research team recently spotted a common crypter being used in the recent Emotet, Qbot, and Dridex campaigns. This same crypter was observed in some of the Ursnif and BitPaymer campaigns as well. One of the reasons that Emotet and Dridex were able to survive for so long can be attributed to their ability to evade detection through the use of a volatile and polymorphic crypter, which wraps its original binary inside to complicate its detection and analysis.

Emotet is modular malware that primarily functions as a downloader or dropper for other banking Trojans. Emotet has been active for the past four years and it was one of the most prevalent malware families of 2018. In previous blogs, we analyzed Emotet and one of its delivery campaigns. Dridex is a banking Trojan that evolved from the Zeus Trojan family. Dridex remains active in the wild even after the FBI’s takedown attempt in 2015. Qbot can allow remote access to a victim’s system, steal information, and upload this stolen information to the attacker’s remote server. Recently, Emotet’s payload URLs were found to be serving Qbot and were using the same crypter we’re examining in this report.

This crypter provides multiple layers of protection on its core malware binary. In this research, we will describe the properties of crypted binaries that hold true across various mutations. These properties can be validated statically (without executing the binary) and used to write a decrypter. Below is a pictorial view of how Emotet’s core binary is digested inside the crypter’s layers of obfuscation and encryption wrappers.

1. Code is obfuscated by shuffling instructions and substituting jump instruction

2. Obfuscated binary is encrypted and appended at the end of the custom loader binary Our goal is to reverse each of above stages to get the core malware binary. Furthermore, the core binary is supposed to be independently loadable/executable, and IOCs should be easily extractable. So, starting with stage 5, we will describe certain heuristics properties of the binary and using these properties we will decrypt the stage and continue to track down till stage 0. In our analysis, we found that these heuristics properties hold true across all mutations of the binaries.

The 5th stage binary is the Emotet executable file that is downloaded via malicious links in MalSpams or malicious macros in MS Office documents. Our goal in stage 5 is to reach stage 4 to obtain the encrypted custom loader binary. As we can see in image 1, the binary at this stage contains scattered chunks of encrypted custom loader binary. We need to spot these chunks and assemble them in the proper order. Before discussing how we are going to do this, what follows are few examples of how these chunks can be spread across the binary. The chunks are outlined in red. 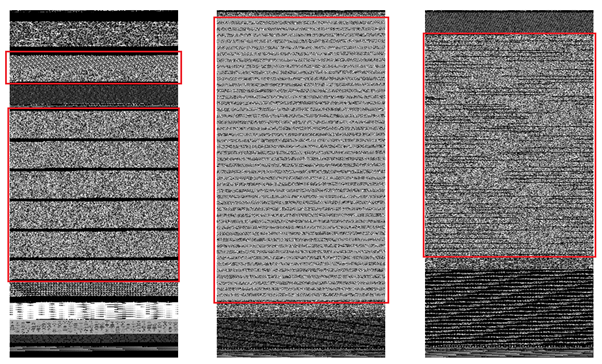 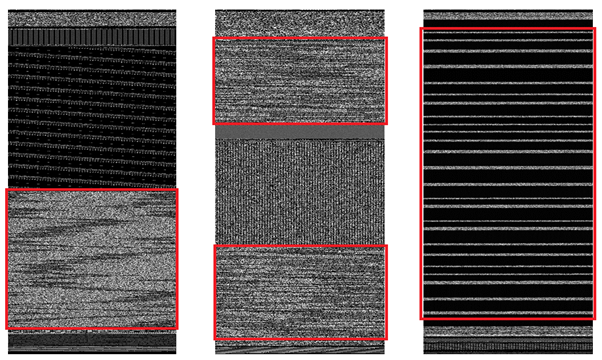 From the above examples, we can see that these chunks are not found in fixed locations, as their sizes are inconsistent, and the order of chunks varies, too. Therefore, our first challenge is to locate these chunks and arrange them in the proper order. The good news is that we know the crypter will also need to arrange the chunks and will do so by storing the chunk addresses and sizes in a table. Let’s call this table “Chunk Descriptor Table.” The bad news is that this table cannot be found in a predictable location in the binary nor is the structure of the table is constant across mutations of the binary. Below are some of the variants of this table structure. Chunk Descriptor Table is basically an array of the Chunk Descriptor Entry.

In above structure, “chunkAddressDword” contains the virtual address of chunk. The size of chunk can be obtained by one of following operations on “firstDword” and “secondDword”. This operation is constant across all chunk descriptor entries.

The following is the pseudo code for finding the chunk pattern. The function “FindChunkEntry” return offset of chunk and the distance of firstDword, chunkAddressDword from the beginning of the chunk offset. If the return value of three consecutive calls to function and length between three returned offsets are equal, then the whole array can be parsed to generate an associative array of chunk addresses and chunk sizes.

Now that we have an associative array of chunk address and chunk sizes, we can combine these chunks to get the encrypted custom loader binary. Here we are at stage 4.

Image 4: Encrypted data showing an example of the repeating sequence of bytes

Here is the pseudo code:

But before proceeding with stage 3, here are few more methods that could also have given us the key in this stage.

DWORD points to a key array; of course it will give a false address. So, we need to validate the key by applying it on encrypted data for each such instruction.

2. In most cases, the key is found just above the pdb path.

Here is the pseudo code.

This is it, we have plain and loadable binary of custom loader. That moved us to stage 2.

In the appended data of the custom loader, there is encrypted data which is nothing but an obfuscated version of the core malware binary. The encryption method is the same as that of stage 4. All we need to do here is calculate the offset of the appended data and apply the decryption technique mentioned in the 4th stage. As a result, we got the core PE file, but it needed some fixes in the code as some instructions were missing in the binary.

The below image is an example of how this obfuscation appears. 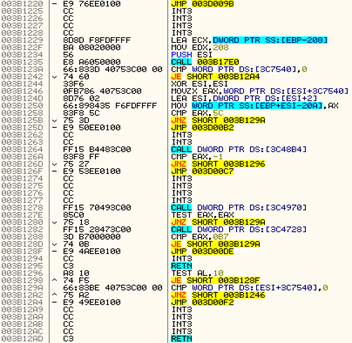 The final objective is to de-obfuscate the code of the core binary. That means we need to return the eaten instructions back to their actual location and remove the JUMPs. At this point, the above code will appear as follows. 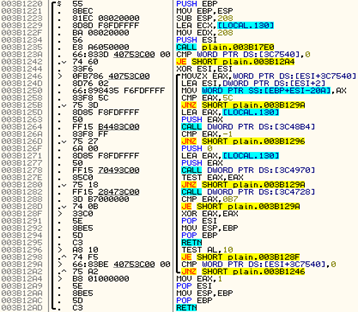 Here is the pseudo code for this.

At this stage, we would have obtained the plain, independently executable core Emotet binary, which can be decompiled by IDA or can be bin-diffed with other binaries extracted by this decoder.

Shining a Light on Shadow IoT to Protect Your Organization