The Role of Security in DevOps Architecture

With the increase of digital business powered by cloud, DevOps has become an infinite backbone behind the software delivery ecosystem. DevOps empowers development teams to deliver applications faster by reducing the time to deploy functionalities and features. The core of DevOps, “automation” for agility and “integration” of various sets of tools for visibility, have reduced the complexity and gaps between traditional development and operations teams. The outcome? Substantial productivity boosts in every development ecosystem.

As DevOps enables speed, agility, and cross-functional collaboration, many organizations run the risk out outpacing “security”, creating a huge remediation backlog for engineering and Infrastructure teams. Fortunately, modern (CI/CD) tooling capabilities allow security checks to be baked into the DevOps process at almost any stage of the development lifecycle (Code|Check-in|Build|Test|Deploy|Monitor).

Cloud-Native Application Security platforms (CNAPP) allows security teams to implement gates and guardrails that can be integrated into any DevOps pipeline, enabling visibility for every software, DevOps, and security engineer. Such a security-integrated DevOps pipeline is called a DevSecOps pipeline. 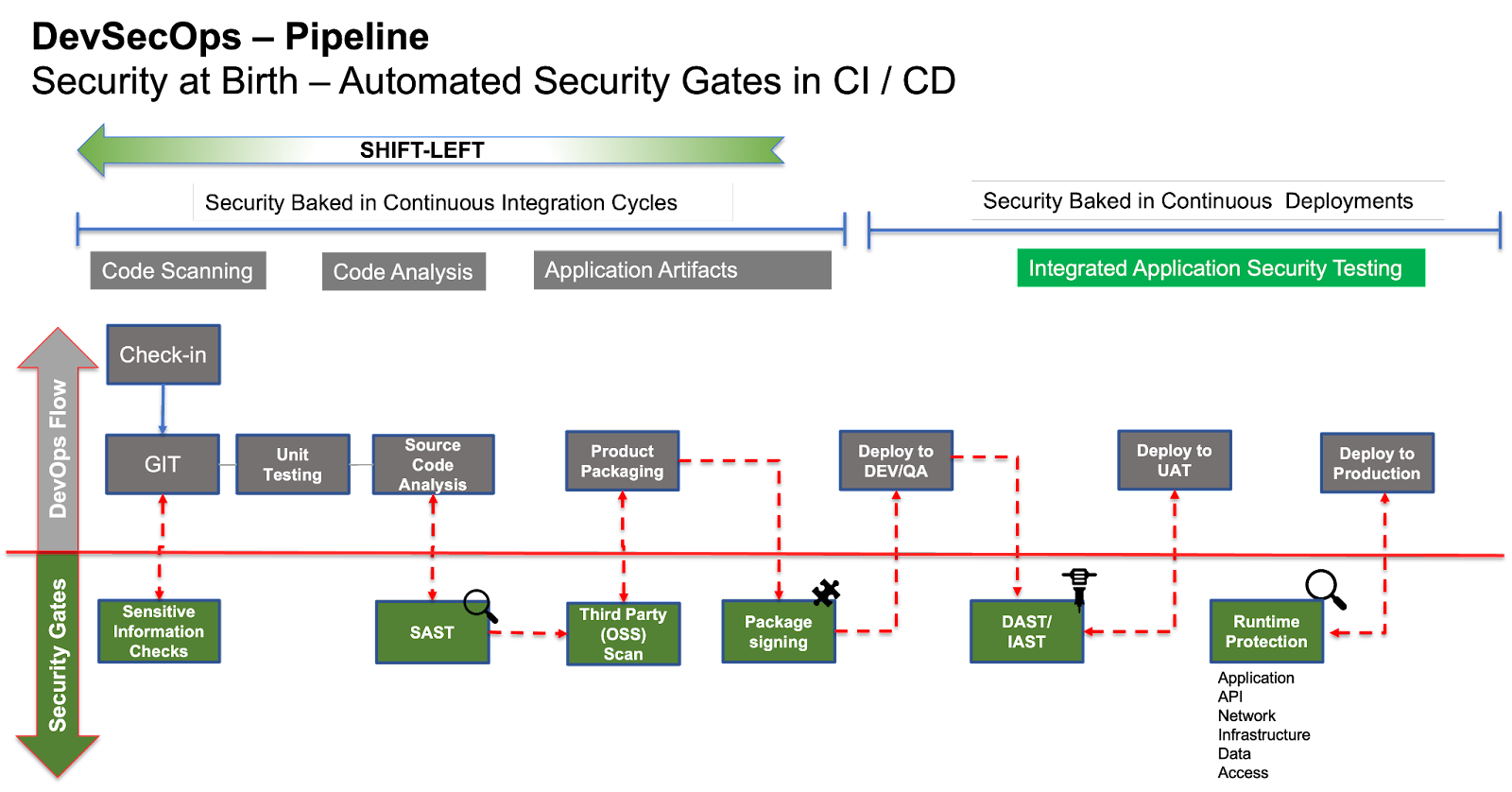 The security team can integrate security gates at various stages of the CI and CD process, as described below:

Source Code & Integrated Development Environment (IDE): Code is born in a developer's IDE. Integrating IaC scanning abilities with an IDE could enable visibility for developers and guide them to follow security coding standards before even the code is checked into a source code system.

The second check can be enabled during the source code check-in process, where every PR and MR raised by the developers is scanned for vulnerabilities and sensitive information leakage using SAST and OSS tools, which gives the approvers ability to sign off on clean and compliant code into the pipeline.

Build and Test - CI Pipeline:  Once the code is approved and merged, the CI workflow is initiated. In this process, security teams can scan the software for OSS (Open Source Software) vulnerabilities and their licenses, along with functional and unit testing. These security gates help to protect the intellectual property rights of the product and prevent zero-day vulnerabilities. This process reduces the review and approval cycles for engineering teams.

Artifacts:  The CI process ends with clean and compliant code being pushed into the central registry. Security teams can enable vulnerability scanning, audit, and access scanning on this central registry to continuously monitor zero-day and unauthorized access and for rogue or unsigned packages being introduced.

Deployment: Certified and signed images from the registry are deployed into various environments for functional, regression, and stress testing. In this cycle, security teams can simulate real-world attacker scenarios on the application “Grey-box testing” and project the exploitable risks present in the application.

How to Solve the Challenge of Connectivity in China

Visibility and Automation: The Underpinning of Zero Trust